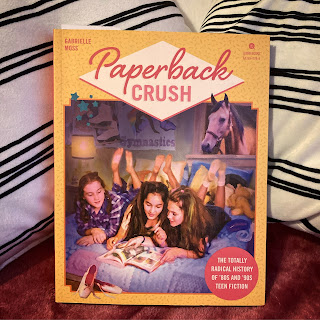 I'm not going to deny it. I had one of the biggest--no, the biggest--fangirl moment of my adult life when I pulled my copy of Paperback Crush: The Totally Radical History of 80s and 90s Teen Fiction from the padded envelope it came in. The cover alone brought back a massive wave of nostalgia, reminding me of the books I loved from age eight when I first discovered The Baby-Sitters Club in my primary school library one Friday morning, to age eighteen when I read Lois Lowry's A Summer to Die shortly after a close friend passed away from cancer. This full colour book explores many of the middle grade and young adult titles from a now past era--where children's books were shorter, were inexpensive enough to be purchased with pocket money and the focus was on fun. These weren't the real life books from the 1970s (though I read many of them as well,) or the blockbuster trilogies that started appearing after Harry Potter, and then Twilight changed the middle grade and young adult reading landscapes, these were books that were unique, of their era and truly loved by readers.

I very much enjoyed this one for the glimpse back. It was written and published in the United States, meaning that while many (though not all,) of the books mentioned were immediately familiar to me, many of the editions featured in the beautiful, full colour pictures were new to me. (Don't worry, they're good covers.) And obviously there are some cultural differences, with the focus being very much on work by American and Canadian authors. Dolly Fiction--utterly beloved in Australia and in some other parts of the world--doesn't rate a mention, though Isla Fisher's Live the Fantasy series gets a mention and there's a short and somewhat damning review of the second novel in the series, Bewitched. Likewise I could not find any mentions of British series from the era, such as Bell Street School. That said, it was a very prolific era and so many mass market books were produced that it would be near impossible to mention them all. And we all had different favourites.  Don't worry, the two biggest series of the era, Sweet Valley High and The Baby-Sitters Club, get the attention they are due. So too do a number of other beloved series from the era such as Sweet Dreams, The Saddle Club, Pen Pals and The Fabulous Five. And speaking of The Fabulous Five, I had no idea that it was a spin-off an earlier series of books. (I wondered if these simply weren't available in Australia, but further investigation led me to found they were published under a slightly different title, and with different covers.

I have a couple of complaints about this volume and they are, unfortunately, well worth addressing. The author looks back at these books from a wholly adult perspective. The snark and sarcasm soon becomes overwhelming, as does the authors need to focus on how many of the books weren't terribly diverse or inclusive. This could have been addressed in the introduction, reinforced as being the main topic in one of the chapters and mentioned again in the conclusion, rather than the author having to remind the reader on nearly every page. I also found it poorly edited in terms of structure, and I would have appreciated a much longer list of sources at the back.

Overall, this is an amazing glimpse back at an era in publishing that is almost universally forgotten, but for the blogs, podcasts and social media accounts of the generations of women who grew up with them. A few books from this era are still in print, many are now distant memories.