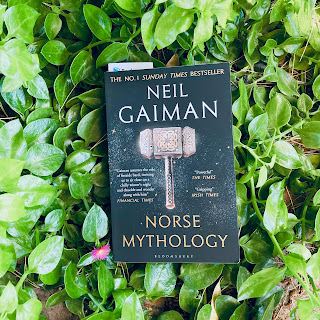 Here is a confession. My knowledge of Norse Myths is sadly lacking, in spite of the fact that these very myths have a very real influence on a lot of modern fiction. One only has to go as far as the Fantasy section at the local bookshop or one's local library, and they can see for themselves just how much influence these myths have on a lot of fiction today. Anyway, I decided to fix that and Neil Gaiman's Norse Mythology seemed like an excellent starting point. After all, I've read a number of Gaiman's novels (along with a few comics and graphic novels,) and his style is not only familiar to me, but I know that I'm safe with an author who genuinely appreciates the myths.

The stories are beautifully retold, bringing together tales of the Gods who lived in Asgard--Odin, Thor, Loki and Freya. As is often the case with myths, each seeks to explain how or why something came to be, with an added dash of morality in there. I enjoyed many of Gaiman's depictions of the Gods, particularly Freya, who knows her own mind and most definitely doesn't want to be controlled, Thor, the hammer wielding God with a voracious appetite and Loki, the selfish, mischief maker that I loved to hate. In the stories themselves there is a little bit of humour, a little bit of gore and a few surprises. My personal favourite story was The Treasures of the Gods which explains how Thor got his hammer, with The Mead of Poets coming a close second--and I especially loved the explanation of how some people wind up writing bad poetry. Gross, but hilarious.

Overall, this is an entertaining read that helped expand my knowledge on Nordic Gods and Myths, and left me keen to learn more.