Review: Aristotle and Dante Discover the Secrets of the Universe by Benjamin Alire Sanez 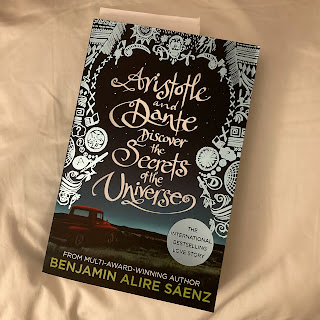 By the time I was a couple of chapters in, I could see just why Aristotle and Dante became a bestseller. A beautiful, slow burn romance, it tells the story of Ari, a teenager who is struggling to get through life and to feel any sense of self and how he meets Dante a boy his own age who soon falls in love with him. But Ari isn't close to anyone ... is he? And he certainly doesn't return Dante's feelings.

Why then does all of the evidence point otherwise?

This was a beautiful, truthful story about a kid who feels like a bit of an outcast, the beautiful boy who loves him, and how Ari learns that the key to being true to himself lies in the way he treats others. It touches on the difficulties faced by the children of immigrants, what it means to have a parent with PTSD and coming out in the late 1980s. Fortunately, Ari and Dante come from loving and supportive families, which gives the book a greater strength. This isn't so much a story of coming out to ones parents, but coming out to ones self. Parts of the story are heartbreaking, and there's some unexpected drama in there as well.