Review: The Sleeper and the Spindle by Neil Gaiman and Chris Riddell 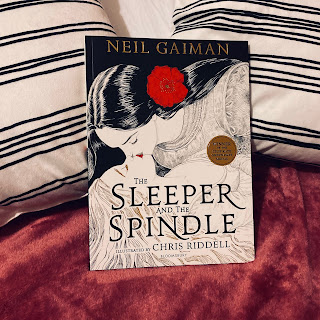 The Sleeper and the Spindle is a retelling of two beloved fairytales ... with a twist. Opening with some character who are dwarves not unlike the ones in Snow White, who are fetching a little something for their Queen, who is in a situation not unlike that of Snow White. But there are a few little twists in there, which I don't want to spoil for others. Anyway, the Queen learns of a young woman trapped in a decades long sleep (see, I told you this was a retelling of two fairytales,) and she and the dwarves go on a noble quest to rescue her ... one that has the most unexpected of results.

Neil Gaiman's work often translates well to a variety of formats and The Sleeper and the Spindle is no exception. The original version of this story was published in Rags and Bones: New Twists on Timeless Tales. This version has been wonderfully crafted as a 70 page picture book with glossy pages and detailed pictures. The story itself is brilliant with unexpected twists and a strong female lead ... one who is most certainly not a damsel in distress or one who is just going to sit around and wait for a handsome prince to marry her.

Although I've often thought that Chris Riddell's illustrations are brilliant, this particular volume shows just how much he is capable of. Each picture, whether it fills a whole page or a third of one is beautifully detailed and brings a new dimension to the story. They truly are a pleasure to look at, while they force the reader to slow down and take in every detail.

Although I've mentioned other examples on this blog before, this book is further proof that picture books are not only for small children. This one is aimed at middle graders, but I suspect that just like Coraline it will be enjoyed by many older teens and adults as well.

Neil Gaiman The Sleeper and the Spindle