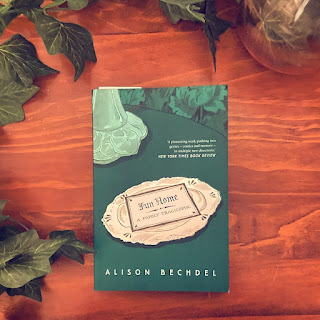 Growing up is never easy, and for some people it can be tougher than others. In Fun Home author and artist Alison Bechdel tells her memoirs of growing up in a dysfunctional family. The graphic novel takes its name from the family business, a funeral home that the kids rename fun home, even though, well, there's not that much fun happening in it.

At the heart of Bechdel's dysfunctional home is her father, a man that uses a carefully constructed image to hide his true self from his children and the rest of the town. He is a perfectionist, and beneath that he is angry and cruel. However, Alison does not get a true glimpse of who her father is, until she comes out to her parents. Her father dies two weeks later, in what she strongly suspects (but ultimately cannot prove,) is a suicide. It's mucky, depraved stuff. What Alison learns is that her father had gone down a dark path, having affairs with his male students and the family baby-sitter, all of them teenagers on the cusp of adulthood.

From there, the narrative is about how Alison seeks to understand her father and why he made the choices he did. Each chapter makes an allegory between her father and one of his favourite novels. While it is easy to feel sympathy for Alison--after all, she's someone who has just made the courageous step of coming out--it's much harder to feel anything but disgust for her father. More interesting is her notations on her own life--coming out, childhood struggles with OCD and her relationship with her mother.

Overall, this one is a little bit dark, a little bit sad and a lot courageous. The subjects tackled are not easy ones, and nor is it always easy to revisit the darkest memories of ones childhood. Some of the allegories feel a little bit pretentious, but they help to keep the story moving along.