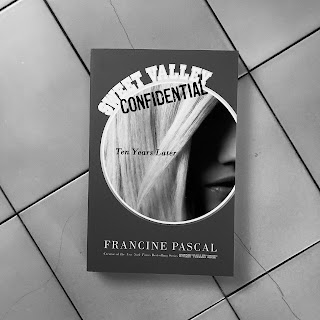 It had to happen eventually.
What started as a soap-like series of paperbacks about a pair of sixteen year old high schoolers, genetically blessed Elizabeth and Jessica Wakefield, and their friends in 1983, soon became a massive franchise. By the time the series ended in 2003 there were books covering the lives of the twins and their friends from age seven (Sweet Valley Kids) all the way up to when they were on the cusp of their twenties (Elizabeth.) From birthday parties that ended in tragedy to having their very old roller coaster installed in their backyard, to being seduced by vampires and solving mysteries whilst staring in Hollywood movies, there was very little that hadn't happened to Elizabeth and Jessica Wakefield.
And then in 2011 Sweet Valley Confidential came along. It went where none of the other series had ever dared to. It featured Elizabeth and Jessica Wakefield as adults.
It's a great idea. However, what could have been a great nostalgia trip for old fans, or at least a little bit of trashy fun only goes one way--downhill--from there.
The premise is this. Ten years have passed since Elizabeth and Jessica Wakefield graduated from Sweet Valley High. Presumably, Elizabeth didn't stay in England and marry Max after all (which was the cliffhanger ending to the final book in the Elizabeth series,) as she is now living in New York and working as a journalist. Or more specifically, she writes theatre reviews. She's single and has a most un-Elizabeth-like friends-with-benefits arrangement with a male friend. And she isn't speaking to Jessica who is back in Sweet Valley, and who is engaged to none other than Todd Wilkins. The pair became engaged shortly after Elizabeth discovered that Todd had been cheating on her with Jessica. And in short, the whole novel is about how Jessica gets Todd after all (the same guy who, ironically, she and Elizabeth fought over in Double Love, the first ever Sweet Valley novel,) and how Elizabeth tries to get her revenge, but eventually learns that acceptance is more important than revenge. Which is fine, except for one thing.
Author Francine Pascal completely disregards the cannon and key events that occurred in the series that she created. Histories, personalities and occasionally even names of key characters are changed. Including those of Elizabeth Wakefield and Todd Wilkins, who were very much broken up by Sweet Valley University. Other key characters, such as rich and spoiled bad boy, Bruce Patman, have undergone major personality changes. (Spoiler: he's now Elizabeth Wakefield's best friend. Meanwhile, Enid has ditched the Alex persona, but everyone still hates her.) And one major character is revealed to be gay, but again, this erases key events and characters from the series.
Overall, this was a disappointing read in more ways than one. The writing itself is poor, the plot is thin and there is very little in there that would please any reader who read past book three of Sweet Valley High.
Not recommended.
Francine Pascal Sweet Valley Confidential