Review: Fortunately, the Milk by Neil Gaiman and Chris Riddell 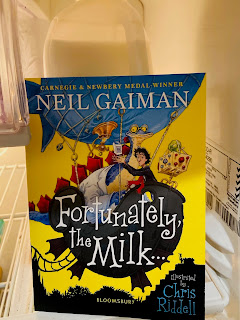 What do you get when you pick up a book and it's about a kid whose mum is away, his dad is in charge and the all too familiar scenario of the household running out of milk? A rollicking adventure featuring time travel, a hot air balloon piloted by a stegosaurus who also just happens to be a professor, some aliens, intergalactic police, vampires (or well, wumpires,) and some, uh ponies. Fortunately, the Milk is a fun and twisty novel for kids, written and illustrated by the same pair who were responsible for Coraline and The Graveyard Book. And, of course, Neil Gaiman has written extensively for adults, writing the Sandman comic, as well as novels like American Gods, Neverwhere, and co-authoring Good Omens with Terry Pratchett just to name a few. Anyway, enough of that...

Fortunately, the Milk opens with the dad character being left in charge of his son and daughter while their mum (presumably, a scientist,) leaves for a few days because she has to go to a conference to present a paper on lizards. It's a cool little twist for a children's book, normalising the idea that a mum can have a pretty awesome career as well as a family. Anyway, in the evening, the dad and the kids use up all the milk making hot chocolate because they miss mum (another cool thing to put in a children's book, that it's normal for the kids to miss their mum and to experience those kinds of emotions,) and there's no milk for breakfast. But not to worry. The dad is off to the shops to get some more milk.

Then he takes a long, long time to return. And when he gets home, he has one heck of a story for the kids, which forms the basis of this 140 page novel. It's fun and it's twisty and no I'm not going to give the whole plot away here. But I will say that it's a good book, and will probably be enjoyed by kids who are a bit older than the intended audience, and by parents who might find themselves wanting to read this one out loud. Chris Riddell's illustrations work perfectly with the subject matter, illustrating the hapless dad as he goes through his many adventures while desperately trying to keep hold of the precious carton of milk. In particular, I love the illustrations of Professor Steg. Equally enjoyable are the extra illustrations at the end of the book. Oh, and the pictures of the dad in this book remind me just a little of a certain successful author of books for children, adults and a number of graphic novels--what do you think? 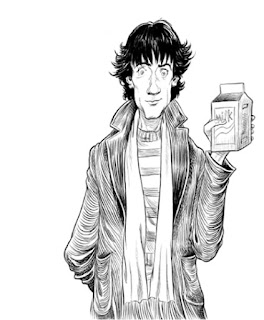 Overall, a fantastic, fun read for kids and for the young at heart.
Highly recommended.