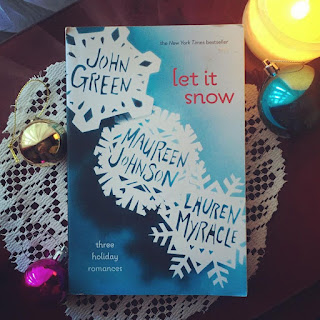 There's something absolutely lovely about this collection of three interconnected novellas, written by three different authors. A snowstorm proves to be a recipe for love for three very different teenagers.

First off in The Jubilee Express, we meet Jubilee who is being shuffled off on a train at the last minute on Christmas Eve to stay with her grandparents. Her quirky, though otherwise respectable parents have been arrested under some pretty bizarre circumstances. Then the train breaks down in a snowstorm. And the worst bit? Her boyfriend, who she misses dearly, doesn't even seem to care. Luckily for Jubilee, she soon meets Stuart who has a similar story about a girl who doesn't seem to care ... and then it turns out the pair have far more in common than matching broken hearts.

Then along comes A Cheertastic Christmas Miracle where groups of rival boys race to be the first to get to a local cafe on Christmas Evve, where a group of cheerleaders from the broken down train are hanging out for the evening. This seems to be really bothering Duke, who is Tobin's best female friend, but it takes him a while to work out why ... and why his adventure getting to the cafe with Duke is far more important than hanging out with random cheerleaders.

The third and final stop is The Patron Saint of Pigs. Addie's kind of oblivious to how things work in real life, but she knows that after she does something wrong that she needs to break up with her boyfriend Jeb. It's the right thing to do and they weren't really working anyway ... were they? Jeb isn't exactly the romantic type and that really bothers her until Addie learns some important lessons about what really matters ... and she finds herself searching for a tiny pig in a snowstorm.

This was a fun and romantic collection, all about young love, snowstorms and broken down trains. I love the fact that the stories were interconnected--for example, Jubilee meets Jeb briefly on the train and encounters the cheerleaders there, while Addie works in the same Starbucks were Stuart had his heart broken and still feels bad about the events that occurred there.