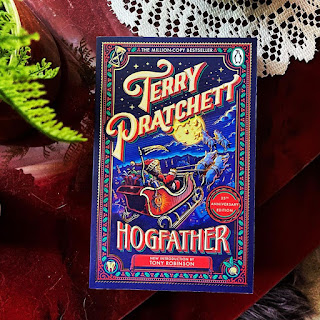 Hogfather invites readers to enjoy a Christmas on Discworld. Or, rather, Hogswatch, which takes place each year on the 32nd of December, and is celebrated with feasts and by the appearance of the Hogfather, a jolly fat man who drives a sleigh pulled by large hogs and who climbs down chimneys to deliver presents to children. Only this year, something is a little amiss. Why is Death driving the sleigh and creeping down chimneys? His exceptionally sensible granddaughter, Susan, doesn't want to know, but finds herself on an adventure to find out anyway. And what's going on with the tooth fairy? And the group of assassins? And why are there suddenly lots and lots of different creatures--from the God of Hangovers to the Cheerful Fairy turning up at Unseen University in droves?

A little darker than some of the previous Discworld novels, Hogfather is a clever satire on Christmas time, traditions and various festivities. As always, Sir Terry Pratchett is at his best when he is satirising human nature, and when he's creating a Discworld version of the things we know all too well. (Just wait for the scene set in the Hogfather's Grotto, where Death, dressed as the Hogfather makes an unexpected visit. Pure fun.) Overall, this is an entertaining read, and perfect for Christmastime.

Hogfather was first published in 1996 and has been recently republished in a special 25th anniversary edition that comes complete with gold foil on the cover and an extra Terry Pratchett short story at the end.

Anonymous said…
What a really good review of a fantastic book.

Unfortunately although I have read the book twice, the date of the celebration totally skipped my attention.