Review: We Have Always Lived in the Castle by Shirley Jackson 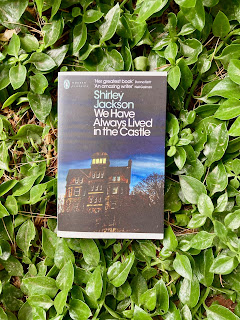 We Have Always Lived in the Castle, Shirley Jackon's final novel is a haunting tale of a wealthy family left to ruin. For as long as anyone knows, the Blackwood family have always lived in a large family estate that is walled off to the local village. But now there are only three of the Blackwoods left, sisters, the sensible and caring Constance and whimsical and childish Merricat, and their sickly Uncle Julian. Soon, it becomes apparent that things are a little well, off. The local villagers hate the family and it is only Merricat who ventures out to buy supplies and only on prescribed days, taking a very specific route, one that fits in with a game that she seems to be playing with herself. We see Merricat harassed by a couple of villagers and the reader is almost inclined to feel sorry for her, after all, it seems that the rest of the family died years before and Constance was charged, though later acquitted of trying to poison them. One could almost feel sorry for Merricat, except for the fact that she seems to rather enjoy the solitude, and having her older sister almost entirely to herself. At home, she is spoiled and indulged. And then leads to rather a problem when an unexpected guest turns up on their doorstep. Cousin Charles, who has his eye on Constance, or, more importantly, the family fortune. Soon, a battle of wills between he and Merricat develop. And it soon becomes clear that there can only be one winner ...

We Have Always Lived in the Castle is a haunting, gothic tale about a family fractured by the most shocking of events. There is something almost darkly comical about how Merricat runs wild, a woman of about eighteen who acts more like a strong willed and imaginative eight year old who needs a little guidance and discipline, while her older sister Constance remains quietly complicit in all things, in spite of the dark events that have shaped her life, having survived not only the loss of her parents and her other family members, but the fact that she was charged with their murders. There's a little bit on witchcraft, though its difficult to tell if Merricat believes in any such thing, if she suffers from mental illness, or if she's a sociopath who likes to mess with everyone, including the reader.

I was able to work out who really was responsible for putting poison in the sugar bowl early on in the story, however, I doubt that was the central mystery. The real one is why Constance remains so steadfastly loyal to her sister and the answer lies with careful reading. Look closely at her relationship with Charles, and various mentions of other members of the Blackwood family.

The ending itself is rather fitting, darkly comic with a hint of tragedy.

Shirley Jackson We Have Always Lived in the Castle