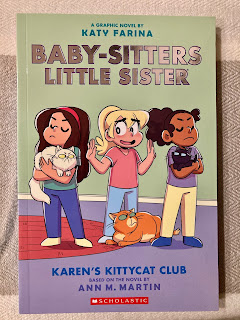 It has been a long time since I read the original version of Karen's Kittycat Club--more than thirty years in fact. In fact--and here's a tidbit for those of you who have been following this blog for a while and know of my obsession with all things related to the Baby-Sitters Club--it was the second Ann M Martin book that I had ever read. The first was Me and Katie (the Pest.) I borrowed this one in partly because it had cats in it, partly because the kids on the original cover seemed to be having a lot of fun and partly because I'd enjoyed reading Me and Katie (the Pest.) At that point, I'd never heard of the Baby-Sitter's Club series and my discovery of Kristy and the Snobs was a whole week away. (Bizarrely, I found that book in an entirely different part of the library from Karen's Kittycat Club.) Anyway, that's probably a story that isn't interesting to anyone other than me, so I'll get back to my original point which is that at some time when it was age-appropriate, I borrowed the original version of Karen's Kittycat Club (the one with the orange and white chequered cover,) from my school library and I remember that one, I enjoyed it and two, it was about a kid who formed a cat club that required members to bring their cats to the meeting and that the whole thing was a disaster. And that's about it. I've never given it another thought in the thirty or so years since. I guess it's one of those books. It steered me toward a path where I would become interested in books and reading, but it never had a great impact on me for what it is. Anyway ...

Karen's Kittycat Club is the fourth Baby-sitters Little Sister book to get the graphic novel treatment from Scholastic. Unlike with the original series, Scholastic seems to be publishing these ones in chronological order. It tells the story of how Karen begins to feel left out, because her older sister Kristy is a president of a club that has turned itself into a successful business. Karen wants the opportunity to spend time with her friends and to make money. But what do she and her friends have in common to form a club? And what services can they provide to make money. When Karen's friend and neighbour Hannie announces that she has just adopted a kitten, Karen gets an idea. She'll start a cat club. She has a cat too, even if Boo-Boo is old, grumpy and just a little eccentric. And she can invite another friend and neighbour, Amanda who has a beautiful Persian cat that she claims is worth thousands of dollars. And since they know all about cats, they can start a cat sitting service!

Unfortunately, nothing goes to plan for Karen. First of all, Hannie and Amanda don't like each other. Second, their cats don't exactly behave at the meetings. Third, Karen's other best friend Nancy feels hurt and excluded when Karen tells her that she can't be a member of the club. (She doesn't have a cat.) And then, finally, the girls aren't getting a lot of requests for their cat sitting service ...

This was an entertaining, though ultimately unremarkable read. As always, Katy Farina gives the story a much needed contemporary update and the illustrations are beautiful. It's a great novel for kids--I can't fault it for doing everything it promises on the cover--though on a personal level this one left me with less nostalgia than the previous two books in the series. In all honesty, this is probably where I'm going to put the books down and move on to something else. (That said, I've already checked online and I've learned that the next book in the series is Karen's School Picture and it will be released in the United States on December 28 ...)

Lorrs said…
I got these for my daughter, who is nearly 5, for Christmas. I have the babysitters club graphic novels which I love, and she likes to look at them, but bit young for story so I thought these were a good choice. I remember some details from the little sisters books but they kind of mesh together into one. Definitely like this updated graphix, the art is so cute and have been enjoying reading them to my daughter. She likes this one because it has cats
11 January 2022 at 09:17

Kathryn White said…
I'm so glad that your daughter is enjoying the graphic novels.
6 February 2022 at 22:07