Review: Laura Dean Keeps Breaking Up With Me by Mariko Tamki & Rosemary Velero-O'Connell 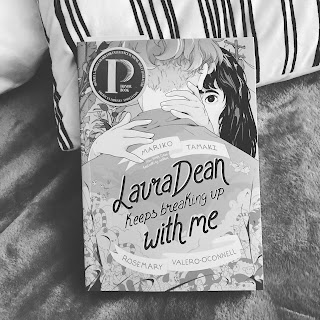 A toxic relationship is at the very heart of this LGBTQI+ graphic novel. Freddy Riley is learning the hard way that love hurts. All she wants, more than anything, is to have a meaningful relationship with her girlfriend, Laura Dean, who she loves more than anything. But Laura Dean likes to live life on her terms, and doesn't seem to understand how her actions and choices can hurt the people around her, especially Freddy. The pair break up after Laura Dean cheats on her, and Freddy finds herself searching for answers. Her search continues as she and Laura Dean get back together again, and she neglects her best friend Doodle, who is going through some pretty heavy duty struggles of her own. Eventually, Freddy realises what she needs to do, and how she deserves to be treated.

This was a compelling read, one that provides readers with some insight into the nature of toxic relationships. Laura Dean is portrayed as being selfish to the point where she truly cannot comprehend how her behaviour affects others. And this is Freddy's story of how she learns to stop giving herself false hope and the courage to walk away. The illustrations are absolutely beautiful, and brave in places.

The novel has a couple of dark spots--first of all, the ending. It's great that Freddy found someone who not only understands her, but who respects her as well, however, I felt that it all came about a bit too conveniently and that it took something away from themes of the importance of always being there for a friend. Then there is a subplot where a major character who is below the age of consent finds herself pregnant to a married man. While the authors are at pains to point out that the particular character shouldn't be judged for her choices, what they do not make clear to the reader is that the character has been taken advantage of (whether or not she consented is a moot point, given her age--and in any case, age of consent laws exist to protect children from exploitation and from making poor decisions due to immaturity.) It is never named as sexual abuse and the abuser suffers no consequences for his actions, while she suffers through an abortion with the support of a friend, while her emotionally distant father looks on. And there's not a great deal of resolution afterward, the story moves forward to be more about Freddy and her rotten relationship with Laura Dean.

Many readers have enjoyed this one, and parts of it are done well. Ultimately, however, I found Laura Dean Keeps Breaking Up With Me was let down by the ending and the clumsy handling of a serious subject.