Greetings From the Unicorner: A Sweet Valley Nostalgia Post 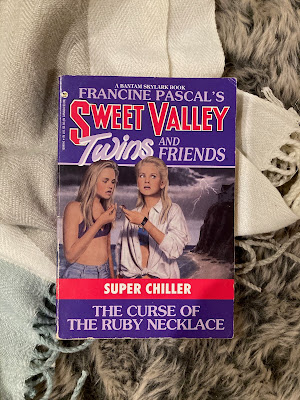 So ... Sweet Valley Twins. The series launched by Bantam (a part of Random House,) on July 1 1986, a little over three years after the debut of Sweet Valley High. Like Sweet Valley High, the whole thing was created, and overseen, by Francine Pascal, but the stories were written by a team of ghostwriters while the novels named the author as Jamie Suzanne. The Sweet Valley Twins series also featured Elizabeth and Jessica Wakefield and a number of popular characters from Sweet Valley High but with a twist--this was a prequel series. The Wakefield twins were twelve years old and had just entered the sixth grade at Sweet Valley Middle school. The twins are slowly beginning to come into their own. The first novel in the series, Best Friends, depicts the pair as they stop wearing identical clothes (predictably, Jessica is keen on the latest fashions, while Elizabeth is more of tomboy,) move into their own bedrooms, and expend their social circles independently of one another. While Elizabeth starts working at the student newspaper and befriends various nerds, tomboys and lame ducks, Jessica joins the Unicorns, an exclusive clique of mean girls. The Unicorns would become such an important part of the series that the club would eventually get their own spin off series.

Once the twins gained some newfound independence at the end of book one, the rest of the series would focus on the many misadventures of the Wakefield twins, and those of their friends. The series had a light, gossipy tone that often relied on shock value. Although the series ran with the occasional serious or dramatic story--take for example the time Elizabeth's friend Sarah Thomas was left to fend for herself after being abandoned by a stepparent--most of the stories were lightweight, and clearly designed to provide the target audience with a bit of entertainment. Take for example the book where Lila lip syncs in a music video and is then forced to come clean when she wins a competition and has to perform live, or the time Jessica makes a voodoo doll of her brother. If rival publisher Scholastic was providing children with sound literary nutrition with books published under their Apple imprint, then you had to look at Sweet Valley Twins as being a kind of dessert that was high in taste and low in nutrition. And it also had the good fortune to be one of the first serials for pre-teen girls on the market, beating it's biggest rival, The Baby-Sitters Club by a matter of weeks. Fortunately, many fans had room in their hearts--and their pockets--for both series along with a number of other notable series that ran during the same era, including The Fabulous Five, The Saddle Club, Pen Pals and Girl Talk.

In 1998 Sweet Valley Twins and its longest running spin-off The Unicorn Club wound up when the Sweet Valley books took a turn in a new direction to make way for a more diverse cast and serious storylines. Sweet Valley Jr High was intended to be a modern and hip series for the new millennium. Although it had some success, the series wound up after thirty novels, and was outlived only by one other preteen series--The Saddle Club.

Although the Sweet Valley brand has seen various revivals since it finished in the early 2000s, with the first six Sweet Valley High novels rewritten and rereleased in 2008, the release of Sweet Valley Confidential (featuring the Wakefield twins in their late 20s and early 30s,) a SVH graphic novel and never ending rumours of a SVH movie, Sweet Valley Twins has always been politely left alone by its creator ... well, for now anyway.

Over coming weeks, I look forward to sharing more Sweet Valley themed posts on a regular basis under the heading Greetings From the Unicorner. Let me know if there are any Sweet Valley topics you think I should cover in the comments below.