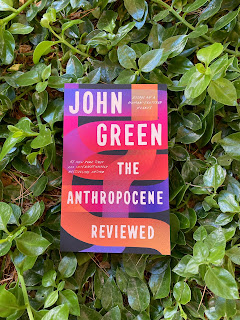 John Green is best known for being the author of several YA novels, most of them a little bit literary, a little bit depressing and always a lot readable. A number of them have been made into films, most notably The Fault in Our Stars, which tackles the topic of teenage cancer with a delicate mix of honesty and sensitivity. The Anthropocene Reviewed is John Green's first published book of non fiction. It's a series of essays in which he offers his thoughts, or well, his review on everything and anything from CNN to Geese to the origins of Monopoly. Interwoven into the narrative are little bits of autobiography, telling of the author's life, his struggles with anxiety and depression and some of his heartbreaking experiences as a Chaplin at a children's hospital. (He did not continue with that line of work.)

I found The Anthropocene Reviewed to be an entertaining read that was simultaneously about everything and nothing. Although parts of the essays were deeply personal and subjective, I found myself relating bits and pieces back to my own life. And I'd find myself occasionally pausing to think about the central argument that flows between the essays. Humans have been on earth for a relatively short amount of time, yet the planet seems almost entirely centred around us.

I read this one over the space of a couple of weeks, taking in just one or two chapters at a time, which I feel is often the best way to enjoy non-fiction. This one will probably appeal more to readers who are deep thinkers, who like looking beyond the face value of everything, whether it be a board game, a song or a supermarket.