Review: Catch Us the Foxes by Nicola West 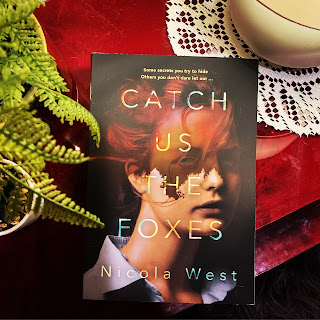 Almost from the first page, I had the sense that there was something more, some kind of detail or plot twist to Catch Us the Foxes, the debut novel from Nicola West. The only difficulty was that I was not quite sure what was up. On the one hand, here was a cleverly crafted scene, opening with an author giving a talk--at a packed Sydney Opera House no less--about her best selling work of auto-fiction. The novel then becomes a story within a story, as the reader is treated to Marlow 'Lo' Robertson's bestseller about how she discovered the body of her best friend, who had been murdered at the local Showgrounds--while the local show is on, no less. Lo is also stunned to discover a collection of strange symbols on her best friend's back, symbols that her father--the local police sergeant--forbids her to talk about. Soon, it becomes apparent that the town and some of the most important people in it, may be involved in something top secret, and deeply depraved. The question is, can Lo get to the truth and find out what really happened to Lily Williams, her best friend and the town's reigning showgirl.

As I alluded to in the opening paragraph, this one had me gripped from the start. Despite the combination of a busy week and a busy workload, I found myself picking up my copy at every possible opportunity, keen to know more. Although I was able to clue into some things, others remained a mystery. And the twist at the very end was so clever, I never saw it coming--and this was in spite of the fact that I had a feeling the whole way through the novel that something wasn't quite right.

Catch Us the Foxes is a well crafted novel that takes an unapologetic look at two aspects of small town life. The first is small town attitudes, with the locals quick to blame an innocent employee from the show for the murder. The second, and more intriguing aspect, is the sordid rumours that have a tendency to plague various towns and places in Australia. (Almost straight away, after learning what was said to be happening in West's fictionalised version of Kimba, I began to think of the stories that I have been hearing since I was in my teens that The Family Murders, which occurred in Adelaide in the late 1970s and 1980s were in fact committed by a group of high profile people in positions of authority. But that is a discussion for another time.) However, one thing that impressed me above everything else was her decision to have a main character who is not always likeable (why should characters be likeable,) and instead presented Lo as someone who was deeply flawed. It's also rare to read a novel where a character of Lo's age doesn't have a love interest or perhaps even two, desperate for her attention, and the novel works better for it. Lo is portrayed as asexual and absolutely fine with that, a rare thing in fiction. Then again, the story is so intriguing that we just don't need a romantic subplot to propel the pages forward.

West has a great deal of talent. Although the subject matter is dark and very disturbing, the author handles it well. I look forward to seeing what she comes up with next, if she chooses to continue to write.

Thank you to Simon & Schuster Australia for my copy of Catch Us the Foxes.

Catch Us the Foxes Nicola West