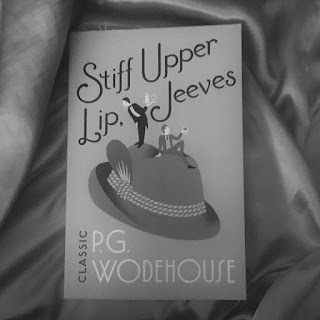 A sequel of sorts to The Code of the Woosters, Stiff Upper Lip Jeeves finds Bertram Wilberforce Wooster an unwilling (and unwanted) guest at Totleigh Towers with his ever-impressive valet Jeeve's in tow. Bertie's job is simple--to steal an ornament that Sir Watkyn Bassett bought at an unfair price, and return it to the previous owner at the insistence of Sir Watkyn's niece Stiffy, who wants revenge on the family matriarch for the fact that he won't give her fiancé, Rev Harold 'Stinker' Pinker a vicarage. Meanwhile, there are other problems afoot--chiefly in the form of Sir Watkyn's daughter Madeline, who believes that Bertie is still in love with her. She is also busy forcing her own fiancé, Gussie Fink-Nottle, to become a vegetarian against his will, which leads to Gussie falling in love with the new cook--who is none other than Pauline Stoker's younger sister Emerald, who has fallen on hard times.

In the hands of many writers, such a shallow, farcical plot would not work. In the hands of PG Wodehouse, however, readers are treated to a book that is light, funny and makes some surprisingly accurate observations about human nature while it pokes gentle fun at the lives of England's idle rich during the period between the two world wars. (The exact year that the Jeeves and Wooster novel are set is never mentioned, however various references to technology and clothing would point to it being most likely set in this era. This setting remains true for most of Wodehouse's novels and stories.) Anyway, there are some truly laugh out loud moments in this one, from Alpine Joe to the credits and debits. That said, this was one of the later Jeeves and Wooster novels to be published and it shows, with the odd recycled joke or situation here and there. Overall, though, it's a light read and a bit of fun that never takes itself too seriously.