Review: Solutions and Other Problems by Allie Brosh 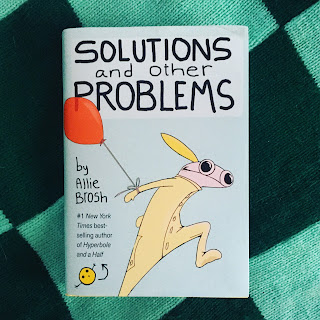 Allie Brosh has been through a lot in the years since she sent her debut Hyperbole and a Half to the publisher. Her younger sister passed away after being hit by a train, she developed a case of endometriosis so severe that doctors initially thought that she had cancer, she has been through a divorce and various relocations to different cities and states. And then there are her continuing struggles with mental health. Anyway, so many events have taken their toll on Brosh and it shows in her writing and cute but crudely drawn pictures that depicts herself as something of a cross between a stick figure and a fish. In this second volume, it becomes clear that Brosh is of the opinion that life is hard and well, pretty much pointless. And somehow, despite this, Brosh still manages to leverage her greatest talent--her insight into human nature--and turn it into a volume that is unique, surprisingly raw and entertaining.

Brosh's drawings are as crude and clever as ever. There are some childhood memories included in here, such as the time her three year old self became fascinated with their neighbour, poor unsuspecting Richard. The stories of her adult life are harder and crueller and many of them end very abruptly, as if to remind readers that she feels there is no point to all of this. And that gets tiring after a while.

Solutions and Other Problems is an insightful and compelling as it is irritating. While Brosh can depict small parts of every day life just as cleverly as she gives insight into grief and to living with a mental illness, parts of this volume feel as though she is holding something back and is not allowing herself to flesh out the stories as fully as she is capable of. The volume is far darker than Hyperbole and a Half, which had darker moments that were balanced out with the pictures and some of the stories taking on a childlike quality.

That said, I am not sorry I read this one--parts of it are quite entertaining, such as Brosh writing about her encounter with a pesky neighbourhood child while she is stoned out of her mind. And the whole concept still feels very original and unique to the author. And while I enjoyed it, I hope for the author's sake that she is not pressured into writing a third volume, and that if such a book ever emerges it is because it is something that she wants to do, and because she has something that she wants to say.

Allie Brosh Solutions and Other Problems