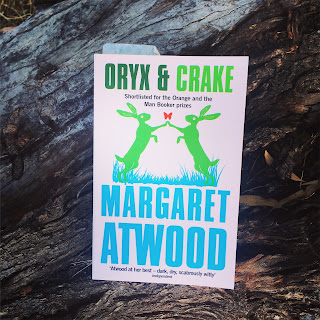 Welcome to the future ... as presented by Margaret Atwood. In this world, all of humanity has died out, except for one man. Calling himself Snowman, he lives a solitary life in the woods where he occasionally provides a bit of guidance to the Children of Crake, a new and emerging genetically modified race, and does his best not to get eaten by genetically modified animals. And he has lots of flashbacks, mostly to do with his childhood, back when he was known as Jimmy, when Crake, the creator of all of this madness was simply his oddball but genius best friend and Oryx, now regarded as a Mother Nature type figure, was his lover. There may be other humans who still exist in this world, by Snowman is too tired to be bothered finding them.

In other words, Oryx and Crake is a dystopian about the evils of genetic modification, with an odd main character who has been thrown into a future that he didn't want and that he finds mostly useless. Through flashbacks, we learn how it all happened. It's also the story of a man who hates his present, but quite honestly, his past wasn't all that great either.

And that's really it.

Atwood tries hard with this one, and though most of the novel is written well, ultimately, it lacks the impact of some of her previous work. Some of the themes--shining a light on sex trafficking and why some people can be loyal to the people who exploit them are handled realistically--so realistically, in fact, that it is difficult to stomach in places. Or maybe that is the point.

Although the novel was first published in 2009 parts of it already feel very dated, in particular, Atwood's portrayal of Aspergers. I can't say that I loved this one in the same way that I have loved some of Atwood's previous work, such as The Handmaid's Tale, but I can't say that I hated it either. It is what it is, a story about genetic modification and the end of humanity.