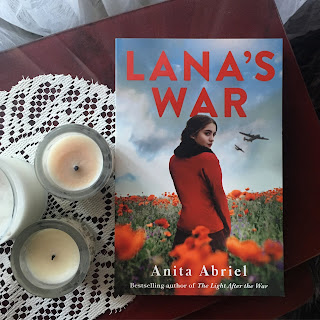 Anita Abriel's second novel takes readers into the heart of Occupied France in 1943. Russian born Countess Lana was raised in Paris, where she now lives with her beloved husband, music teacher Fredrick. She is on her way to inform Fredrick that she is expecting their first child, but arrives just in time to witness a terrible event--Fredrick is shot by none other than Alois Brunner. Lana then suffers a miscarriage. Thisty for revenge, she joins the French resistance, utilising her position as a Russian Countess to pose as the lover of a Swiss businessman. But life in the resistance is tough, and dangerous, especially when Lana's instinct is to follow her heart, rather than her head ...

This is an entertaining page turner. The backdrop of the French Riviera makes an interesting contrast to the horrors of war, and the many, many grave atrocities that were committed there, and across other parts of Europe. Abriel's prose is easy to read and I often found myself reading a page or even a chapter more than I had intended. Without giving too much away, I do have a bit of a problem with the ending. Most of the novel pointed toward Lana ending up with Charles, with Guy's whereabouts to remain a mystery (perhaps with the odd hint or two that he was still chasing after Alois Brenner.) However, the ending was something quite different and it felt clumsy and tacked on, as though the author had changed her mind at the last minute.

Lana's War is a light and entertaining historical fiction novel, and while I have some grumbles about the ending, I did find it to be an enjoyable read. Lana is a likeable protagonist, while other characters like Odette made the story all the more compelling.

This book was read for the Aussie Author Reading Challenge 2021