Review: The Old Man and the Sea 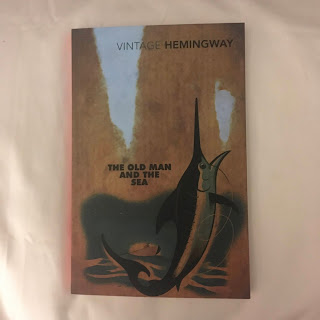 The Old Man and the Sea is arguably one of Hemingway's best known works. Often studied in high school English classes, it's one of those books that everyone knows, or at least knows of. And yet, somehow, this one passed me by until recently.

Set in Havana, the novel opens with Santiago, an ageing fisherman who has not caught a fish in many, many days. He is considered so unlucky by the other fisherman, and in his adopted home (Santiago was born in Spain,) that even his apprentice has been forced by his parents to move to a different--and luckier--boat. Fortunately, his former apprentice still keeps an eye on him, ensuring that he is comfortable and fed. Anyway, one morning, Santiago goes out to sailing and finally lands a fish. And not just any fish, but a giant fish, suddenly, he finds himself pulled out to sea and determined not to let go of this fish. He will conquer it. But at what cost?

Short, and increasing bleak as the narrative goes on The Old Man and the Sea works as a metaphor for life--the unexpected successes, the way life can slowly wear you down and the way the young will care for the old. It is a well written story, though, arguably, not terribly uplifting. However, Hemingway's real talent lies in his ability to tell the story easily and without a lot of pomp and ceremony, or showy literary devices. The volume was short enough for me to read it in a single sitting.

Ernest Hemingway The Old Man and the Sea