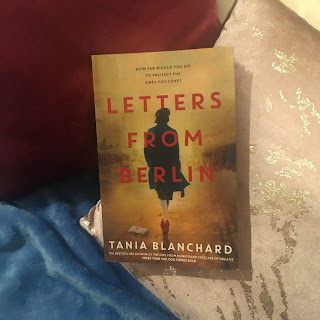 Australian author of historical fiction Tania Blanchard is back and in fine form with Letter's From Berlin, a story of love and survival set in Second World War Germany. Opening in Sydney in 2019, the reader is introduced to Ingrid, a woman who was adopted as a baby and who moved to Australia with her adoptive parents following the second world war. She has never heard from--nor been able to find--any trace of her birth mother until now. She and her daughter Natalie begin to read the letters that were sent by Susanna that tell a tale of a woman doing her best to survive ... and to keep her loved ones safe.

Letters From Berlin is a compelling, though often heartbreaking, novel. It matters not how much time marches on, the events of the Second World War were horrific in every sense, and Blanchard successfully brings the sense of heartbreak, and the complex emotions experienced by the ordinary people of Germany who were caught up in a horrific war that they neither approved of, nor wanted, to the page. The decisions that Susanna make are tough throughout, and make for an emotional read. So too is the reality that so many people, and families were separated due to the war. The ending is quite touching.

Thank you to Simon and Schuster Australia for my copy of Letters From Berlin.