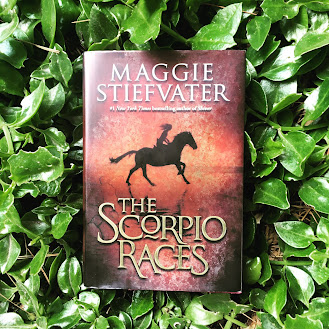 In The Scorpio Races American author Maggie Stiefvater takes the myth of water horses and turns it into a well plotted YA paranormal romance that is all her own. On a tiny island off the coast of Ireland a race is held each November, where participants ride into the sea and have to keep hold of their water horses, or capill usice just long enough to make it across the finish line. But the races are fraught with danger--while the capill usice are tame on land, what they do when they return to water is a different story. Sean Kendrick is a winner of the races many times over, and a favourite to win this year. But this time around there is a surprise entry--Kate 'Puck' Connelley--and she's the first girl to ride in the Scorpio Races ...

This is a well plotted story that pays proper--and genuine--tribute to the myth. Told from the duel perspectives of Sean and Kate, we see just how much their horses mean to them, and exactly why they need to win. Puck needs the money to pay of the mortgage that her now deceased parents left behind--and her motivation is more important now that ever, that her older brother has decided to leave the island and, in turn, cast Puck and her younger brother to a life of poverty. Sean, meanwhile, is already living the live of poverty, where his talent with horses is the only thing keeping him on the good side of his sadistic employer. And though life on the island is often harsh and full of cruelty, both and drawn to it for their love of horses and the sea.

The romance side of things is pretty light on, while the author spares no details of just how brutal life can be on the island. Early on, I wasn't properly convinced of Puck's motivation to enter the races on a pony, and I think the author could have done a better job of setting her up as a courageous and adventurous young woman who loves her family and her home, before dropping that particular bombshell. Even the news that she will leave the family home is not revealed until a good way in to the story. Sean is an easier character to get to know and to identify with, though some of his chapters were moderately less interesting until the race draws near and the reader learns just how savage his rival Mutt can be.