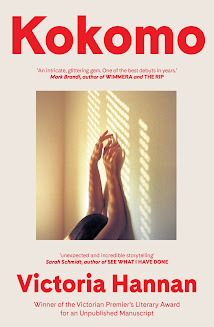 Kokomo opens with a scorching hot sex scene and the main character convinced that what she is experiencing is love. Of course, it isn't, and after her hot date is interrupted by a phone call informing her that her mother has left the house for the first time in twelve years, Mina finds herself returning to Australia and to the mother and the life that she left behind to take up a career in advertising in London. What happens over the next few days challenges all of her ideas of what love is, and the many different forms it can take.

There has certainly been a lot of talk about this book for well, a little while now. A winner of the Victorian Premier's Literary Award for an Unpublished Manuscript, the novel was soon picked up by Hachette (one of the biggest publishers in Australia,) and it is being touted as an exceptional debut. The difficulty with such publicity is that it can raise reader expectations to the point where it becomes counter-productive when they actually sit down with a copy of the novel. Fortunately, Kokomo tells the story that it promises on the back cover and does so in a way that is readable, often relatable and with a surprising lack of pretension. It is easy to feel sympathy for Mina, after all, she hasn't been treated well by her employers, past and present, she lost her dad when she was only young and her relationship with her mother is suffering due to a complete lack of communication, which is mistaken for a lack of caring. But when Elaine's story--and the source of her misery--is revealed, the story takes an unexpected turn, for the better. Even if the situation is well, messy. Side characters like Mina's friend Kira (a star on Instagram,) and Shelley (a mother and wife to a man who is climbing the corporate ladder,) help to show the many different roads that many women can take, though they often end up secondary to the men in their lives.

Overall, this is an enjoyable read, with a good old dash of Australian life, and an honest look at the complexities of what life is like for contemporary women.