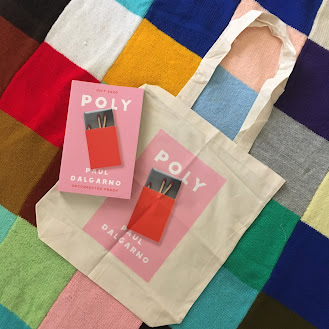 What if Helen Garner's Monkey Grip had been written by Tim Winton, been given an added dash of black comedy and been set in contemporary Melbourne? The result, I suspect, would be not unlike Poly, the debut novel from Australian writer Paul Dalgarno.

Chris and Sarah are turning forty and are in something of a slump in their relationship. Or to be more specific, there's no sex between them any more, and the guy that Sarah met six months after she and Chris married has recently passed away and she's taking it all rather badly. Then again, Sarah is pretty much self absorbed in every possible sense. It's difficult to understand why she is still even with Chris, or why he would still love her, but they're together, they have a son and a daughter and they have decided that the key to saving their marriage is to embrace a polygamous lifestyle. Or more specifically, Sarah wants to have lots of flings with various men and Chris decides to let her, because it beats the alternative of losing her. But there are a few surprises in stock, mostly in the form of Zac, a twenty-something friend who seems like a saviour at first, but soon becomes more trouble than he is worth, and with Biddy, the musician that Chris falls in love with.

Poly is a dark comedy that does what dark comedy does best--it takes an honest and frank look at human relationships. The result is all rather uncomfortable and will probably divide readers into two categories--readers who love it and readers who loathe it. For me, it was a great read, though uncomfortable on occasions.

Thank you to Ventura Press for my copy of Poly.