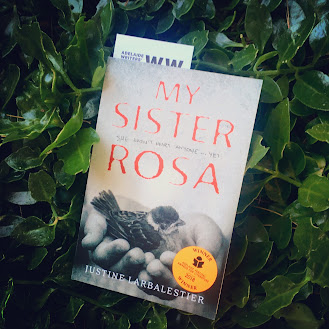 Nature versus nurture is the question at the very heart of My Sister Rosa. Che Taylor is seventeen years old, and has his hands full with his ten year old sister, Rosa. Rosa is clever, talented, sweet on the surface and, Che is very certain, a dangerous psychopath. Fortunately, Rosa hasn't harmed anyone physically ... yet. And Che is doing his best to stop her, in spite of the fact that no one, not even their parents, will believe him about Rosa's true nature. On top of that, he's trying to live like a normal teenager which isn't easy in itself when he's an Australian kid who has spent most of his adolescence travelling the globe and he's just landed in New York--a city that is about as different from Sydney as you can get.

This was an interesting, and oh so creepy read, about a young man trapped in a nightmarish situation. Throw in a pair of negligent parents in there, and you're left with a book that is unsettling. The author portrays Rosa as a cold and calculating villain, who plays on all of Che's worst fears for kicks. Meanwhile, key details about Che--and their parents--are cleverly hidden in the narrative, though I felt that some of these details were hidden for a bit too long.

The novel also raises an important question about the differences between Che and Rosa, even though, perhaps, they're not so different genetically. What is it that makes one child from the same family evil, while the other is not?

Ultimately, My Sister Rosa is a compelling read about a young man faced with a near impossible situation. There are a number of twists and turns along the way that kept me hooked. While the subject matter is quite dark, it also raises some important questions and while ultimately reassuring the reader that people are not shaped by biology alone.

This book was read for the Aussie Author Reading Challenge 2020