Review: The Girl She Was by Rebecca Freeborn 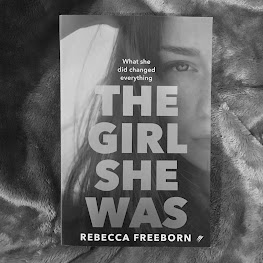 The Girl She Was offers readers a compelling narrative about a woman who has suffered more than her share of guilt for something that happened in the past. At age seventeen, Layla had what she thought at the time was a very grown up affair with her married, twenty-eight year old boss. When things went bad, she took her revenge, and ran. For years she has tried to outrun the events that happened when she was seventeen. But when she receives a message that says I know what you did she finds herself having to confront her past head on.
Using duel timelines, with Layla at seventeen and Layla at thirty-seven, the author shows the reader straight up that what happened between Layla and her boss, was abuse, not love, to the point where the way Scott treated her very much shapes Layla's negative view of herself as an adult. Her adult relationships suffer, while teenage Layla is an innocent kid, a late bloomer who is taken advantage of by an expert manipulator. The novel is well worth reading just for the way it shows just how someone who is technically above the age of consent can still very much be taken advantage of and abused by an adult.
While the the whole thing is compelling overall, I do have a few grumbles about this one. The conflict between Layla and Jodie seemed to be resolved a bit too easily. Most of the characters are a little two dimensional, in particular, Layla's friends Renee and Shona. That said, this is the first novel I've ever read that mentions the characters going to a Magic Dirt concert and that left me with a smile, as did the mention of the Crown at Victor Harbor.
A story of overcoming abuse and mental illness.
Recommended.
This book was read as part of the Aussie Author Reading Challenge 2020
Rebecca Freeborn The Girl She Was