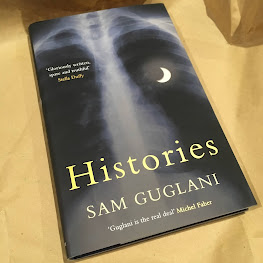 Set in a busy hospital in London, Histories is comprised of a series of short stories that take place over the course of a week and feature people from all walks of life--doctors, nurses, patients, cleaners and many, many more. In short, it's a story of a hospital and many, many people within its walls.

I purchased this book a little over a year ago as part of a 'blind date with a book' promotion that an Adelaide bookshop was running at the time. It's probably a good thing, because I most likely never would have picked it up had I seen it on the shelf. It was an enjoyable enough read, though it starts with a shocking story of doctor/patient abuse that left my blood boiling, particularly with that sections sadly realistic ending. Other stories are a slightly more palatable, that of a junior doctor who feels shown up by a colleague, the oncologist whose mind isn't really on the job who has to talk with a pair of difficult patients and the cleaner who is a survivor of domestic violence. The whole thing has a vibe of just how harsh reality can be, and it does tend to get old after a while. That said, the author is a doctor and certainly seems to know his subject matter.

A few good spots, but I would be reluctant to recommended it to anyone.