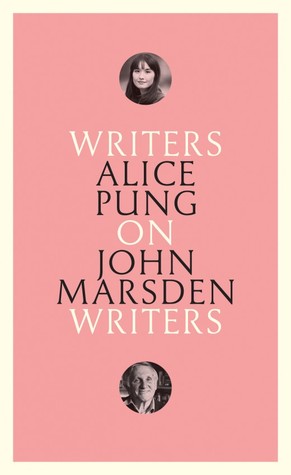 After a brilliant session at Adelaide Writers' Week last Saturday, where Alice Pung spoke with John Marsden, I just knew that I had get my hands on a copy of this short but brilliant book in which Alice Pung speaks about how she has been influenced by John Marsden's work.

Pung's story of how growing up in Melbourne, she found inspiration Marsden's work--the harsh realities faced by many of his characters from teenagers who are in jail (Letter's From the Inside, Dear Miffy,) to how Ellie and her friends use their ingenuity to help stop an invading military force (Tomorrow When the War Began,) is almost immediately relatable. After all, there is something brutal--and painfully real--about Marsden's characters, whether they, like Tracey in Letters From the Inside are in juvenile detention with no hope of release any time soon or who, like her penpal Mandy come from a seemingly respectable middle class family who refuse to address eldest son Steve's obsession with guns and violence. What was also pleasing, however, was to see that Pung's own experiences with the author and his work were different to my own--even when we had shared similar reactions to the stories.

Highly recommended to fans of both authors.

On John Marsden is short enough to be read in a single sitting. It forms a part of Black Inc's Writers on Writer's series.

This book was read as part of the Aussie Author Challenge 2020.