March 22, 2020
I have no idea how the subject came up, but recently I was talking with a friend about what were the worst movies of all time. You know those movies that everyone has seen, but no one will ever admit to watching voluntary from beginning to end, except as a vomit enducing experiment to see just how bad the movie can possibly be. The usual suspects came up; Howard the Duck, Fifty Shades of Grey, Superman IV.

And then my friend mentioned a film that unintentionally left me psychologically scarred for life.

Released in 1992, Beethoven is a Hollywood flick about a family who adopt a cute St Bernard puppy who soon grows up to be a big and boisterous dog who is loved by all, except for the grouchy, workaholic dad whose schemes to get rid of him ultimately fail. I'm willing to admit, it isn't a terrible movie. The film has its moments, in a cutesy kind of way, and, it was successful enough for it to spawn about half a zillion direct-to-video sequels.

Nothing too offensive, right?

When I was eleven years old, I learned that Beethoven can be used as a surprising guerrilla warfare tactic by enterprising adults. This happened at just about the point where the school year was coming to an end. As is the case at most primary schools across the nation, now and back then, not much learning gets done in the final few weeks of school. Those weeks are usually about excursions, perhaps Sports Day or a camp, rehearsals for the Christmas concert and making entirely impractical and useless Christmas gifts for parents and grandparents. That particular year, however, our school had a special gala day in November, and everyone was a little bit over crummy, handcrafted useless goods, and so our teachers had to think of a new activity.

And so, our class teacher and the teacher of the other grade five class came up with an idea.

On Friday afternoon, we could watch a video. And this time, it wasn't to be an educational film. It would be an actual movie. And more exciting still, was that every class member could nominate a movie. The teachers would go up to Kevin's Shop (a deli next door to the school that had a small but popular video hire service,) and reserve the winning title. We were all pretty excited.

The nominations came flying in and eventually there was a three way tie between Home Alone, My Girl and Drop Dead Fred, the last two being new releases. No one had seen My Girl yet, but we assumed that it must be cool because it starred a girl who was about our age who had Macauley Culkin for a sidekick and Drop Dead Fred, with its title, and the fact that it starred Rik Mayall from The Young Ones was ticking all the right boxes. Eventually, after some debate, the tie was broken. Drop Dead Fred was declared the winner and the teachers promised that a copy would promptly be reserved. Our class teacher had a few reservations of her own about the film, but it had been declared the winner, and she was expected to be a good sport about it all.

On Friday afternoon, approximately fifty excited kids, myself among them, made their way upstairs to the school library, where the school's one and only video and television were located. The time had come to watch our chosen flick, a silly, slapstick comedy about a woman and her troublemaking imaginary friend.

We sat down, watched as my teacher opened her bag. Out came of a copy of Beethoven. 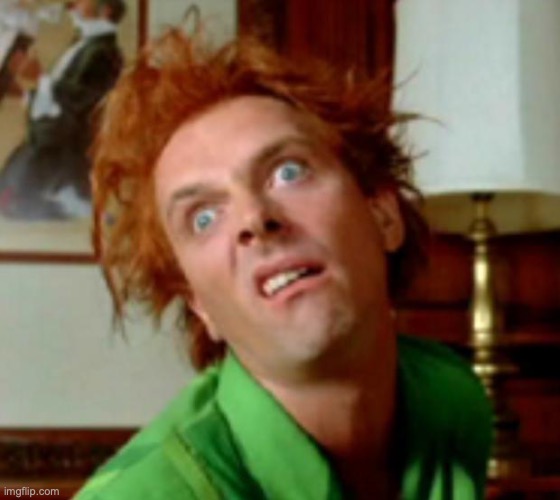 Yep. Beethoven. Not Drop Dead Fred, the movie we had all agreed on, but Beethoven. According to our teacher, when she went to Kevin's Shop that morning, she had accidentally picked up the wrong video. And this was all well and good until I asked her how she could have possibly picked up the wrong video from the shelves when Kevin had a copy of Drop Dead Fred and I found my name written in neat script on the library chalkboard with a tick next to it.

This was the one and only time at primary school that I ever had a "warning."


And it was all thanks to Beethoven.

I really don't care that Drop Dead Fred is technically considered a worse film than Beethoven. I don't care that Drop Dead Fred has a rating of just 9% on Rotten Tomatoes than Beethoven. There is nothing, absolutely nothing more disappointing than being eleven years old and excited to watch Drop Dead Fred and being forced to sit through Beethoven instead, whilst suffering the indignity of having your name written on the chalkboard for all to see. It's the kind of stuff that will scar a kid for life. Well, that and the fact that our teacher flat out lied to us. She didn't even try to make her lie plausible, by accidentally picking up Home Alone, which one third of the kids in year five had voted on and would probably have watched without complaint.

And for that reason I have always associated Beethoven with the fact that like the grumpy old dad who tries to sell the family's Saint Bernard to people with less than noble purposes, some people just cannot be trusted.