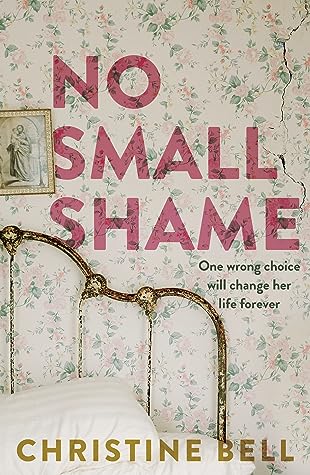 Written with heart and a whole lot of empathy, No Small Shame is the story of Mary O'Donnell, a young woman who is growing up in poverty in Scotland. She and her childhood friend Liam desperately want to better themselves. And, it seems, that opportunity may come their way when each of their families is offered the opportunity to come to Australia. But life in Australia in the period leading up to the first world war is tough, much tougher than any of them imagined. And though brave, Mary remains wilfully blind to Liam's many faults until the pair find themselves forced into an unhappy marriage by their strict Catholic families. But when Liam leaves to fight in the war, Mary finds happiness with Tom, a Protestant who her family will never approve of. Can she find the courage to be with the man she truly loves, or will the misguided sense of shame placed upon her by her family put an end to it all?

This is a story of choices, consequences and second chances that will ultimately tick all the right boxes for lovers of Australian historical fiction. In some ways, the story reminded me a little of Not Only in Stone by Phyllis Somerville though No Small Shame is set mostly in Victoria. I enjoyed reading this one, in particular its gritty portrayal of life in Australia and the harsh realities that Mary had to face--something that is all too real for many women. It also highlights the experiences of those who returned from the war, who were more or less expected to just return to their previous lives, in spite of the many horrors and hardships they had faced.The religious conflict was an interesting touch, though my sympathies certainly stayed with Tom.

Thank you to Ventura Press for my copy of No Small Shame.

This book was read as part of the Aussie Author Challenge 2020.
Christine Bell No Small Shame