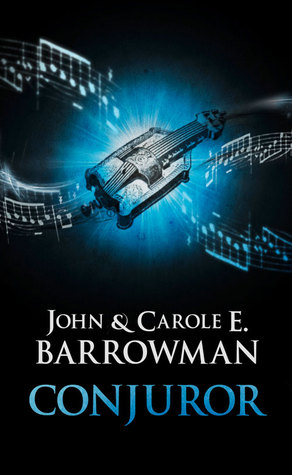 Remy is a Conjuror, who is able to create things just by playing his harmonica. Unfortunately, this skill means that he is on the run ... and also vengeful against those who killed his beloved mother who possessed the same skill. To do so, however, he will need to team up with Matt and Em Calder, twins who time travel through famous works of art. But what evil forces will they be up against as they search for the truth?

This was an entertaining read, perfect for readers who are transitioning from middle grade to YA. I found myself enjoying Remy's story more than that of Matt and Em, and felt that I had missed some crucial details about their lives. After finishing the novel, however, I discovered that the authors had previously written a trilogy featuring Matt and Em, which helped certain parts of the story make more sense.

Conjuror is the first instalment in the Orion Chronicles. Oh, by the way, if the names of one of the authors sounds familiar, it could be because John Barrowman plays Captain Jack in Doctor Who and Torchwood. His co-author and sister, Carole, is a creative writing teacher at a university in Wisconsin.