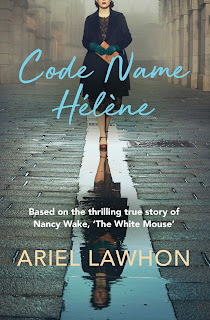 Author Ariel Lawhon takes the remarkable life and achievements of war hero Nancy Wake and spins them into an utterly addictive story of a marriage, wartime and fighting back against injustice. Two parallel storylines make up this novel. The first is of Wake's time in France as a freelance journalist and her meeting and eventual marriage to Henry Fiocca, a man who refused to reveal her whereabouts to the Gestapo right up to the end. The second tells of her arrival in Occupied France by parachute in 1944 and her important role within the French Resistance which helped to save the life of thousands.

The author portrays Nancy Wake as a plucky young woman determined not to sit on the sidelines while there are so many grave injustices happening all around her. It is also the story of a marriage--of two people so devoted to one another that even arrest, drawn out torture and the threat of imminent execution cannot break up. The prose is addictive, with plenty of cliffhanger chapter endings and descriptions of dangerous situations. Consequently, I found myself reading 'just one more chapter' until the book was unexpectedly finished a little after one in the morning.

My only real grumble with this one is that the occasional bit of American slang creeps in, though it is not enough to ruin the flow or authenticity of the story.

Anyway, this one is a ripping read, based on the life of a truly remarkable and awe inspiring woman.

Thank you to Simon and Schuster Australia for my copy of Code Name Hélène.
Ariel Lawhon Code Name Helene