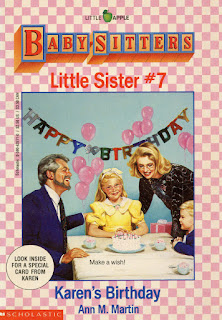 Here's a thought. Thirty years ago today, the Baby-Sitters Little Sister book Karen's Birthday was released. And if Karen Brewer, star of the series aged in real time, that would make her thirty-seven years old.

And this begs the question: What would Karen be doing now?

In the series, Karen was an outgoing and outgoing and imaginative, child with a keen interest in Literature and the Arts. She was a child prodigy, and was skipped a grade in elementary school and later came second in a state wide spelling bee.

And so, here's my theory:

As she grew older, Karen's status as a child prodigy continued. She excelled at school, and, thanks to Watson Brewer's fortune, was able to attend some of the most prestigious schools in Stoneybrook. She made the most of every opportunity and excelled any subject that involved literature and the arts. However, as Karen matured, she was able to reflect on both the positives and negatives experiences of coming from a blended family, and began to think of ways that she may be able to help kids who faced similar experiences.

Karen was accepted at Harvard University. While there, she was an active member of the drama society. She later traveled to England and studied for a PhD in English Literature at Oxford University, where she was a member of the Oxford Revue.

Upon her graduation and return to the United States, Karen realised that her heart lay with helping children. She trained as a child psychologist and now runs her own clinic in Stamford, Connecticut. The distance between Stamford and Stoneybrook means that she can visit both of her parents and families more often. It also means that she can travel easily to New York, where she can visit her brother Andrew, who is an editor at a major publishing house. She also loves visiting her stepsister Kristy, who is now the Mayor of Stoneybrook, and her adopted sister Emily Michelle, who is a social worker. She frequently argues with her stepbrothers Charlie, Sam and David Michael on facebook, but the arguments are usually friendly.

Karen has no significant other and is an active member of the local asexual community.