Review: Where the Truth Lies by Karina Kilmore 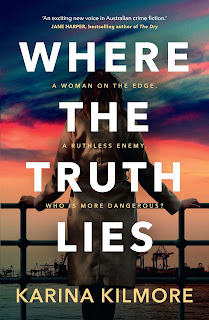 The debut novel of journalist Karina Kilmore (better known in the papers are Karina Barrymore,) is a gritty tale of backstabbing, corruption and murder set in Melbourne. New Zealand journalist Chrissie O'Brien has moved to Australia to start afresh after a personal tragedy. Which would be fine, if it wasn't for the fact that she is in a near constant state of self-loathing, and that her boss and most of her colleagues resent her very presence, landing a good job just at the point when many other journalists are being fired. Determined to prove herself, Chrissie begins work on a story about possible corruption on the docks. But when a female dockworker turns up dead (shortly before she was due to talk to Chrissie,) things start to take a very nasty twist. And Chrissie won't give up her battle to expose the truth, no matter what the cost.

If you are searching for is a twisty crime novel that features a main character who is both flawed and interesting, then Where the Truth Lies is for you. The author offers a gritty depiction of Melbourne, a city that despite being one of the largest and arguably, most interesting, in Australia, is rarely paid the attention that it is due in commercial fiction. And Mike makes for an interesting side character who gave the story some much needed balance.

That said, I have a couple of grumbles with this one,  in particular, Chrissie's dark past and reason for her self-loathing is revealed too soon. I feel very strongly that the author has what it takes to write a solid crime novel--something to rival The Dry--and, hopefully, readers will see this with her next offering.

This book was read as part of the Aussie Author Challenge 2020.
Karina Kilmore Where the Truth Lies