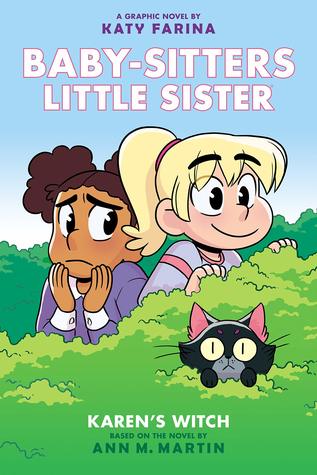 With the Baby-Sitters Club Graphix novels proving so popular with readers, it was only a matter of time before the Little Sister books got a look in. And Katy Farina does a commendable job of developing the first book in the series into a beautifully illustrated graphic novel that has a far more contemporary feel than the original.

Just as with the original series, the novel opens with Karen Brewer being six going on seven. There is a big emphasis on the fact that Karen and her little brother Andrew divide their time between two houses, however, this story takes place over the course of a weekend at their dad's mansion. (This is a theme that continued through the first three books of the original series, with each of them focusing on a weekend spent at the Brewer's mansion.) Anyway, this time around Karen is a bit freaked out by the crazy old lady who lives next door, who she is convinced is a witch. Along with her friend Hannie, Karen searches about for evidence, which leads them to confronting the neighbour, which, in turn, leads to Karen learning a life lesson about snooping, though she remains convinced that the lady is really a witch. And that's really it. This one is a short, cute story suitable for kids aged between six and about nine. The illustrations are a bit more cartoonish than the BSC graphix novels, though that seems totally appropriate.

For me, this was an okay read. Although I read and enjoyed some of the Little Sister books during my childhood, I never read this particular title, so it was less of a nostalgia trip for me and, consequently,
a little bit less exciting for me to see the story reimagined. That said, there is a lot to offer young readers, especially those who aren't quite ready for, or maybe can't get quite enough of, the Baby-Sitters Club graphic novels.

Sidenote: These books are set a little later than the latest title in the BSC graphix series, so sharp eyed readers will notice a couple of differences that may seem like continuity errors.
Ann M. Martin Karen's Witch Katy Farina