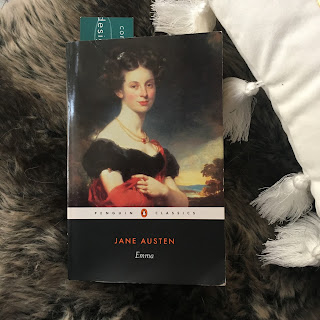 Emma, Jane's Austen's third novel, shows a slight change of direction for the author. After penning two similar but different tales of young women whose futures depended on them marrying well (and in spite of some surprising odds,) Austen turned her hand to Emma, a story featuring a spoiled and imperfect heroine.

Emma is beautiful, part of England's upper middle classes and basically born into a life of privilege. She has no need to marry and is determined that she will not--however that does not stop her from trying to matchmake her friend Harriet, who is not quite so well off. Or to be more honest, for Emma to meddle and break up the blossoming romance between Harriet and a local farmer and set her up with the local clergyman, which has disastrous results--something which her good friend Mr Knightly cautioned her against. After this, several months pass in which Emma learns a number of useful life lessons, mostly in not interfering, being a bit nicer to people and getting a comeuppance of sorts when it turns out that two major characters have been secretly engaged the whole time. Fortunately, Mr Knightly is there to balance Emma out and well ... I don't think I'm really giving away terribly many spoilers there.

Although this one contains a bit less romance than Sense and Sensibility and Pride and Prejudice and a little less humour, Emma is an enjoyable read, though a little slow in places. Most of the drama (and comedy) comes from the author's believable commentary on human nature and what life was like for women in the early nineteenth century. (For example, the character of Jane Fairfax contrasts Emma nicely, a young woman who is born into poverty just as Emma has been born into privilege and whose accomplishments mean that Emma envies her. However, Austen has the good sense to keep the character slightly in the background, meaning that the readers sympathies lie with Emma, who dislikes her for fairly trivial reasons.)

Overall, Emma has become a classic for a good reason and will no doubt continue to be enjoyed by readers for many generations to come.
Emma Jane Austen