Review: Jeeves and King of Clubs by Ben Schott 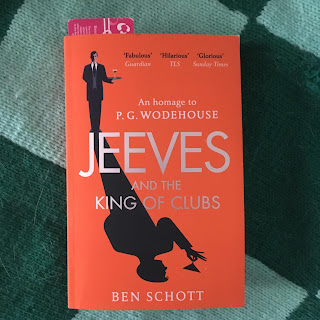 With permission from the P.G. Wodehouse Estate, British author Ben Scott has created this clever tribute to Jeeves and Wooster, suggesting that Jeeves was a British Intelligence agent all along, and now  both he and Her Majesty's Government require the assistance of Bertie Wooster to ferret out a fascist spy.

This one was an entertaining enough read that brings back some of the greatest characters from the original series (think Madeline Bassett and Roderick Spode,) and the author creates some truly funny situations. However, it ultimately lacks the punch of the original, and I'm not sure that I approve of how the storyline featuring Iona was wrapped up. While I'm all for artistic licence, an important part of these novels is their predicability and the fact that we know that at the end, both Jeeves and Wooster are going to be basically back to where they started from again. That said, the author delivers some great lines and his prose often feels like a fine tribute to Wodehouse.

Ben Schott Jeeves and the King of Clubs PG Wodehouse