Review: The Light After the War by Anita Abriel 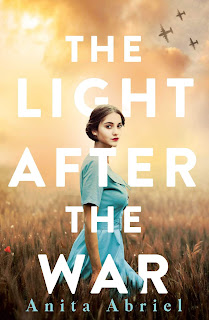 The Light After the War is a gently written story of two best friends, Vera and Edith who find themselves displaced after the tragic events of the Second World War. In 1946 and in their late teens, these two Hungarian women find themselves as refugees in Naples. They have lost everything they loved after a daring escape from a train headed to Auschwitz. What follows is a story that spans from Italy, to Venezuela, to New York to Australia as Vera carves out her career--and finds true love along the way.

Just as the title hints, this one is very light reading. Vera has clearly had a difficult time of it, but her extraordinary childhood (during which she became proficient in several different languages,) helps her to make the most of every situation while she pulls her dear but slightly less responsible best friend Edith along with her. Though they suffer some setbacks, many things came a little too conveniently, or easily, to Vera, which became annoying in places. Ultimately, though, this would be an excellent book to place in the hands of a reluctant reader, particularly one who might otherwise be put off by stories of refugees and survival due to graphic or confronting content. For seasoned readers, it makes for a bit of light escapism.

Random Trivia: This novel was inspired by the author's grandmother, a Holocaust survivor.

Thank you to Simon and Schuster Australia for my copy of The Light After the War.

Anita Abriel The Light After the War