Review: Valley of the Dolls by Jacqueline Susann 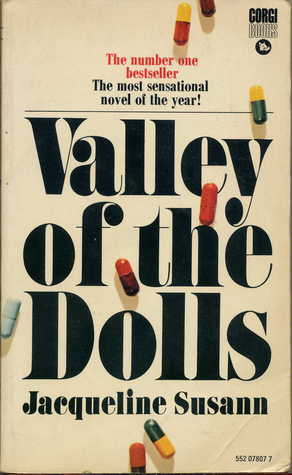 Well before Fifty Shades of Grey, and even the novels of Jackie Collins, was this steamy, controversial and ultimately, trashy, novel that topped the bestseller lists back in the 1960s. Written by an entertainment industry insider, this page turner tells the story of three very different women and their rise and fall, just as the American entertainment industry is experiencing is greatest change, the advent of television.

Anne is the nice girl next door, a moderately wealthy young woman from Boston who aspires to be something better than a wife and mother, the role that everyone assumes will be hers from the time she is born. She shocks everyone by leaving for New York and working first as a secretary and then as a model. She experiences a string of high profile relationships, however, her ultimate downfall is her infatuation with the charismatic and caddish Lyon. Neely is an impulsive young woman with nerves of steel (at least some of the time,) who is determined to do whatever it takes to rise to the top, and finds herself rising and falling numerous times, and betraying everyone that she cares about along the way. Finally, there is Jennifer, a woman whose desire for security and fame often leave her desperate.

There is no denying one truth. This book is trash. Pure trash. Certainly it's entertaining trash--imagine, hee-hee, if the beautiful and wealthy people of this world really did live like the characters in this book--but after a while the melodrama, lack of nuance and characters (particularly men,) who can change their personalities at the drop of a hat becomes quite wearing. Then again, only the most humourless of readers wouldn't be amused by Neely's antics, the sheer number of bad relationship choices that Jennifer makes and the fact that Anne, a supposedly independent woman, continues to lust over a man whose love is, at best, a fleeting and self serving thing. From a historical perspective, the position of the women being subservient to men whether they be their lovers or their employers rings surprisingly true--there was no such thing as feminism in the 1940s and its little wonder that as they age, the characters know that they are losing what little power they have in this man's world, hence their eventual descent into the valley of the dolls. (Dolls being, of course, the slang term for various drugs taken by people in the entertainment industry during that era.)

In some ways, Valley of the Dolls reads like a pop culture and romanticised version of The Great Gatsby, written from a female perspective. In another way, to say that means that I'm looking for a level of depth that just doesn't exist within its pages. As I said, it's trash. Pure, escapist trash.

Recommended? You decide.
Jacqueline Susann Valley of the Dolls