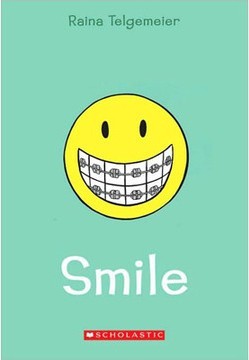 Being in desperate need of some cheering up, I purchased this graphic novel the other week and I found myself completely drawn in by this autobiographical account of Telgemier's years in Middle School, and her first year of high school. This happened, despite the fact that after I read and reviewed Drama (another Telgemeier graphic novel,) I decided that these books really were just for kids and I should bloody well read something a bit more age appropriate. Anyway, I bought a copy of Smile just at the right time and it turned out to be the right book to turn my shitty day around.

Smile tells the story of an accident that led to the loss of the author's two front teeth when she was in sixth grade. What follows is years of painful dental visits, braces and, at one point she has to wear a retainer with two false teeth attached. While all of this is going on, she has to navigate her first crush, the discovery of her real love (drawing) and some pretty awful bullying from the girls who are supposed to be her friends. Other events, such as the San Francisco earthquake of 1989 are detailed.

I really enjoyed this one, despite the fact that I'm a few years younger than the author and grew up in different part of the world. Schooling in Australia, particularly South Australia, is quite different to the experience of kids in America. Middle schools are slowly being introduced here, and my own high school had separate junior and senior campuses, but things like school cafeterias, dances and taking specialised classes with kids from other grades are totally alien to my experiences. Consequently, it was fun see what life is like for kids who do those things. And while I never had any problems with my teeth, one thing I could certainly relate to was some of the bullying that Raina had to put up with from her so-called friends. She was a bit artsy, and most importantly, a bit kinder, and this made her a target for the others, who liked to prop themselves up by making her feel bad. I also liked the moral toward the end--that life got better when she started focusing on the people and things that she liked.

I think this would be a great book to pass on to anyone who is feeling a bit insecure and unsure of themselves, particular teens and pre-teens, though anyone who has ever been a teenager should be able relate to this one.