Review: That Eye, the Sky by Tim Winton 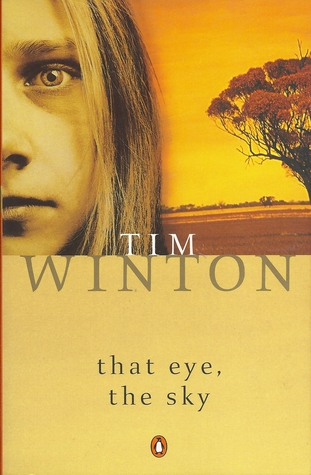 Tim Winton is, without a doubt, one of Australia's best-loved authors. With this in mind, it is surprising just how difficult it is to find copies of his early novels--or, more to the point, anything that was published prior to Cloudstreet. Over the years, I've managed to acquire all of his early novels from various secondhand bookshops and even from the odd visit to the Salvos or Vinnies (I even have a first edition of An Open Swimmer, which is close to falling apart,) and I got a bit excited when In the Winter Dark was finally published as a pocket Penguin but one book remained consistently evasive. That Eye, The Sky was originally published by McPhee (a now defunct Australian publisher,) in 1986 and about ten years ago was republished by Penguin. And a few weeks ago, I managed to get a hold of the Penguin edition. (Fair enough, I probably could have bought the eBook. But eBooks by Australian authors are always horribly expensive. And I wanted a paperback to keep on the shelf with the rest of my collection.)

That Eye, The Sky tells the story of Ort, a twelve-year-old boy living in a remote part of Western Australia in the mid-1980s. It is almost summer and things are not looking so good for Ort (whose name is short for Morton.) His dad has just been seriously injured in an accident, his Grandmother is suffering from dementia, his friendship with Fat, the boy from across the street is falling apart, and his sister, Tegwyn is consistently angry and self-harms. In the midst of this, Ort must help his mother be strong. And then a strange man arrives at the house, offering the family help just when they need it the most ...

This was an interesting take on a troubled family, seen through the eyes of a child who doesn't always understand everything that is going on around him. Most of the family politics are lost on Ort who is struggling to come to terms with the fact that his father is now a paraplegic and that things are never going to return to the way they once were. In the background is the story of his sister--an angry fifteen-year-old who resents the hand that life has dealt her. There are various pieces of evidence throughout the book that suggest that Tegwyn has been sexually abused, that she is being further taken advantage of by a central character in the book, and the second to last chapter points to a bleak future for this young woman.

Henry, the vagrant that arrives at the house, who lends a hand and who turns out to be a self-ordained minister, is certainly an interesting character--he is certainly both a saint and a sinner. He's keen to atone for something from his past, but he may be just what makes, and breaks, a family that is falling apart.

There is a little bit of magic realism within the narrative, and, as always, Winton perfectly captures parts of the Australian way of life that are rarely discussed in fiction--the long and monotonous summer days, blatant sexism, small town prejudices.  I also enjoyed the spiritual element to the novel--it's certainly a bold move.