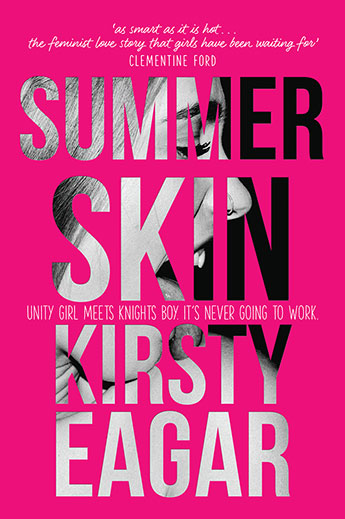 Every now and again it happens. A book comes out and everyone is raving about it. Everyone loves, love, absolutely loves it. The book gets loads praise from prominent public figures, and lots of lovely, lovely glittering four and five star reviews and bloggers. Finally, a copy falls into my hands and ... well, I just don't get it. Sadly, Summer Skin, which was so well-received by readers in early 2016 was one of those books. I gave the book three chances, over the space of about a year, before, finally pushing my way through, and wondering what it was that everyone else had seen in it that I had missed ...

Summer Skin tells the story of Jess, an outspoken feminist, set against a back drop of Brisbane Universities and hook up culture. Presumably, Jess is in her late teens. She lives in a co-ed dorm of Unity College a fairly modern and liberal residential college, and her enemy is the all-boys dorm from a Knights College. She meets one of the boys from Knights College in strange circumstances which leads to a hate at first sight relationship ...

The set up is great and what I did appreciate about this story is that the lead character is a feminist, and the author tries very hard--and succeeds--in having a meaningful discussion of what it means to be a feminist in twenty-first century Australia. It is not used as a cheap backdrop, or as a meaningless plot device to keep the heroine away from her love interest for a little while. Mitch is presented as a character who is tough on the surface, but whose vulnerabilities make him seem very real. Both of these things are rare in a New Adult novel, where the focus is normally ... well, actually some scenes are pretty damn hot.

The problem that I had with this book was trying to follow it. The author and I seemed to be on very different wavelengths. Early on, I felt as though I had just been dropped into a war zone in a foreign country. (Or in that YouTube video that starts off with "Hi, my name's Catrina!) There is no meaningful introduction to the characters or their situations. I would have liked more of an introduction to Jess and the event that led to the her hating Knights College. (Because, frankly, the way the Knights boys treated Farran deserves a lot more discussion early on.) Also, the experiences of Jess were just so different from my own experiences of university life that I found them very difficult to relate to. (I didn't actually know anyone who lived in a residential college--my own alma matter had a co-ed dorm on campus, but most of the students who lived there were from overseas. Kids from the country or interstate usually lived in share houses or, occasionally, boarding houses.)

This one was not a winner for me, but plenty of other readers have enjoyed it.