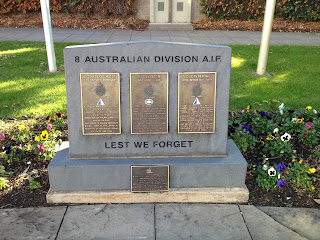 This memorial in North Terrace pays respect to the brave Australians who served in the 8th Division during World War Two--such as my grandfather, Jack White.

These soldiers were involved in the fall of Singapore, found themselves in Changi and some worked on the Burmese Railway. Many died, along the way, but a few made it back to Australia. Although my grandfather was lucky enough to make it back to Australia, where he became engaged twice, married once and fathered five sons, he was plagued with health problems and died when he was still relatively young. He never met his youngest son, my uncle, or any of his grandchildren.