Review: Something to Say by Frankie Press 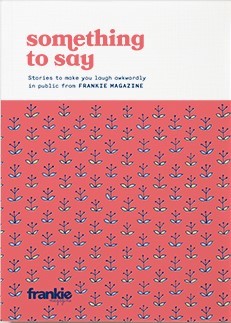 Sometimes cute, sometimes crude, sometimes thought provoking and nearly always hilarious Something to Say provides readers with a slice of truth, deliciously served inside a very beautiful, and very quirky, book. Something to Say is Frankie Magazine's very first book and it contains stories that have appeared inside the magazine during its twelve year run. (Meaning that I've probably read a number of them before, but hey, these are definitely worth a second read.) The book itself is presented beautifully, on notebook style paper, that sometimes feels like a bit of a contrast to some of the crude and sweary articles, but that makes it kind of cool. There are lots of reflections on life, and those odd things that happen to all of us--one author reflects on how a trip to the service station in the middle of the night led to being pelted with a pie and then an escape with a couple of Kinder Surprises in hand. There is commentary on family, fashion (or family and fashion, as one author reflects on how he wears his grandfather's old clothes,) and nearly everything in between.

I read this one in small snatches over the course of several days, as is often the case with non-fiction anthologies, the stories are often better and have more impact when I read just one or two at a time.

Thank you to Frankie Press for my reading copy.
Frankie Something to Say