November 13, 2016
On select Sundays I will be reviewing some of the old Apple Paperback titles from my childhood. These titles were published, or republished by Scholastic during the 1980s & 1990s and were written and set in the United States. In Australia, these books were typically only available from libraries or could be ordered through catalogues that were distributed through primary schools, though some popular series found their way into various bookshops. Most of these titles are now long out of print or have been updated and republished for later generations ... 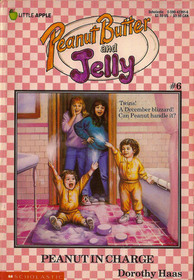 I have very clear memories of reading this book when I was a kid--I remember when it came out, our school library got a copy in almost straight away and I was the first kid in the whole school to borrow it. It was the first time I had ever been allowed such a privilege. Proudly, I took the book home that night and read it in one sitting all by myself. Consequently, I thought that it was the best book ever. (Stop rolling your eyes. I was eight years old. Also until that point I had never really taken much interest in books or reading. The next week, I'd return to the school library, find discover a series called the Babysitters Club and the course of my life was changed forever.)

Anyway, Peanut Butter and Jelly was an entry level series, published by Scholastic under their Little Apple imprint. The series is about a pair of elementary school kids, bombastic Polly "Peanut" Butterworth and her best friend, quiet and studious Jilly Matthews. Each book dealt with an age appropriate subject, some where lighthearted (such as the one about a Halloween party,) while other, darker subjects were discussed, such as the loss of a parent (in book one, Peanut and her family move interstate after Peanut's father dies,) and peer group pressure (book seven).

Book six details a misadventure where Peanut and Jilly inadvertently find themselves in charge of three year old twins during a snowstorm. The subject matter is handled in a way that is humorous, but gentle. What makes the book interesting, however, is that during the course of her adventure, Peanut realises that she's not really a little kid anymore. She's capable of caring for others and making some sound and selfless decisions if she has to--and she's probably capable of more than what the adults around her realise. That said, she's still a kid (she's amused and a little revolted by the fact that her twelve year old sister and Jilly's twelve year old brother seem to be attracted to one another,) and the author cleverly demonstrates this by having Peanut and Jilly make snow angels outside while Mrs Butterworth watches, once their adventures are all over.

I think the subject matter really appealed to me at the time, because I was sort-of going through the same thing. For me, eight was a tricky age. I could not have cared less what pre-teens were doing, but I was also no longer a little kid. I was allowed to walk home by myself. (In reality this meant that I would start walking home with two other girls from my class, who lived around the corner from us, and we'd nearly always be met by a parent somewhere along the way.) At school we were allowed to play in The Big Kids Area which consisted of an oval, some play equipment that would probably be considered a death trap by modern standards, a cement stage, some hand tennis squares and a basketball court. That said, we were also the youngest kids in The Big Kids Area which didn't make me feel terribly big at all. And some of those big kids were, quite frankly, jerks. But when I had to walk through The Little Kids Area, it reminded me that I was a big kid too.

Anyway, this is a well written book. It's very 1980s America, but the message itself is great.

About the Author: Dorothy Haas worked as an editor before becoming a prolific author of books for children and young adults. As well as the Peanut Butter and Jelly series, Haas penned the bestselling Secret Life of Dilly McBean and the picture book adaption of Disney's Pinocchio.