November 06, 2016
On select Sundays I will be reviewing some of the old Apple Paperback titles from my childhood. These titles were published, or republished by Scholastic during the 1980s & 1990s and were written and set in the United States. In Australia, these books were typically only available from libraries or could be ordered through catalogues that were distributed through primary schools, though some popular series found their way into various bookshops. Most of these titles are now long out of print or have been updated and republished for later generations ... 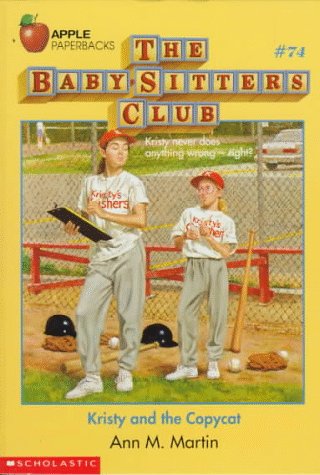 I have a confession to make. I actually have no memory of this particular Babysitters Club title being released in Australia. Perhaps by the time it was released (1994) I had already outgrown or was beginning to outgrow the series. (I know it was definitely a distant memory for me when the Babysitters Club Movie eventually came out, but I think that was in 1995.) After all, it was the year that I actually turned thirteen and I discovered that the books, while well written, didn't really cover the whole scope of thirteen-year-old problems. Like period pain. Or chronic unpopularity. Then again, an important part of the Babysitters Club books was the fact that the target demographic were girls aged eight and up, kids who were, obviously, younger than the five (or in this book, four,) most popular characters. Then again, I also have to confess, that I probably would have bought, and remembered, this book if the cover, title and blurb had actually focused on the more interesting, and important, A storyline.

In this book, Kristy tries out for the school softball team and--unsurprisingly--she makes it. Making the team soon turns sour, however, when some of the more experienced members of the team insist that the new girls take part in a hazing prank--Kristy and the others are expected to spray paint one of the old sheds at Stoneybrook Middle School--or the other girls threaten, they will find a way of kicking them off the team. Kristy and her new friend Dilys do not want to take part (other characters Bea and Tonya think that it's a bit of fun,) but allow themselves to be pressured into doing so. (Yes, Kristy Thomas, president of the Babysitters Club, not only gets bossed around by other kids, but she does something bad. If only, if I only, I had read this when I was thirteen.) The girls sneak out and do their evil deed, during which time Bea and Tonya start smoking. When they are almost caught, they run away and Kristy realises that she has left her can of spray paint behind.

Then Kristy learns that the shed has burned down. And not only has the shed burned down, but a member of the public was seriously injured when he tried to put out the blaze.

Then the boys softball team gets blamed for the fire.

The most compelling, and interesting part of the novel, deal with Kristy's feelings about what has happened. Being a good kid, she's quick to jump to the conclusion that it was probably the combination of the left over spray paint and matches that started the fire. She struggles with feelings of guilt, writes herself off as a vandal and all round bad person, before realising that she has to confess. And I think that what's quite subtle here, is that Kristy experiences those feelings because she is someone who has a conscience, who is eager to do the right thing, even if she allowed peer group pressure to get the better of her. It's a scenario that is relatable to many kids. Real life, of course, rarely ends quite as neatly as a Babysitters Club book, something that I learned during my early years of high school. But that's a darker subject that may not be suitable for some of the younger fans of the books.

Then it turns out that the fire was started by some high schoolers. Kristy is off the hook, but not before she plans to make some big changes to the softball team and the way it operates.

As I mentioned at the start of this review, the title, cover and blurb focus on what is essentially a subplot. During Kristy's crisis, her stepsister, Karen, who has always looked up to her, begins hanging around a bit too much and copying her in rather an annoying fashion. Eventually after a talk with Kristy, Karen learns that it is best to be herself, rather than copying other people. A note in the back of the book from series the original author, and later overseer of the books, Ann M. Martin backs this philosophy up, and I cannot help but wonder if, as the author of a series about a group of kids who were older than its target market, did she sometimes worry that readers were copying the antics of the BSC characters a bit too much? Was she worried that had the book been titled Kristy the Vandal! that it may have inspired someone, somewhere to cover a shed in spray paint. I guess I'll never know.

A solid enough instalment to the series.

About the Author: Ann M. Martin is the original author of The Babysitters Club series, and has written a number of other books for middle-grade readers and a few books for young adults.

About the Ghostwriter: Nola Thacker is a prolific author and ghostwriter of books for children and young adults. Her notable works include an unauthorised biography of Christina Aguilera and the Skating Dreams series. She wrote nearly all of the BSC books told from Abby's perspective.