Random Trivia About ... Behind the Scenes

November 16, 2016
Welcome to my new semi-regular post, Random Trivia About ... which contains well, random trivia about one of my books. This time around I'm going to be focusing on Behind the Scenes, my third novel, which I re-released with a new cover last year. 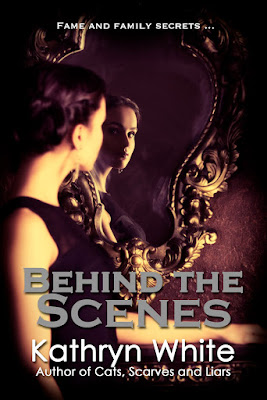 Catlin is a nickname given to her by her mother, as she was unable to pronounce Catherine properly.

The novel opens shortly before her eighteenth birthday. If you do the maths, this means that novel is set in 2007. (Or if you want further confirmation, Johnny's headstone lists his death date as 13 June 2007.)

3. The first part of the novel is set in Southcoast, a fictional town south of Adelaide.

Another of my novels, Best Forgotten, is set in the same location.

St Kilda is a real suburb, the street is fictitious. I named street after the inventor of television, John Logie Baird. Behind the Scenes is the only one of my novels to be set in Melbourne.

5. In the original draft, Catlin died of an accidental drug overdose.

I changed it because, frankly, that ending was depressing.

6. Catlin appears as a twenty-something in one of my unpublished manuscripts.

The grown up version of Catlin has a PhD in Psychology, works at a university and still does the occasional acting gig. She's on hand to give some much needed advice to my protagonist, but at this stage, I'm not certain that the project will ever be released.

7. I named Catlin's baby sister after Keeley Hawes the lead actress from Ashes to Ashes.

I was a big fan of the show and I'd never heard the name Keeley before and wanted to include it in one of my novels.

Behind the Scenes is available from Amazon and all good online retailers.

Behind the Scenes Random Trivia About