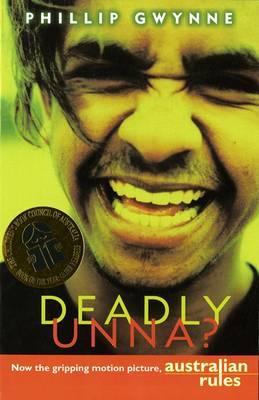 Deadly, Unna? hooked me almost immediately with it's realistic dialogue (so similar to how kids spoke when I was growing up in South Australia,) and sense of place. Gary Black is a fourteen year old kid just trying to survive life in the Port, a small South Australian town. Surviving means being one of eight kids, putting up with his father's wrath and doing anything to prove that he is not a gutless wonder (the worst possible thing that a teenage boy can be in his small town). This year, Gary is not only playing on the local football team, but he has been picked to play in the Grand Final. The football team is made up of a mix of boys, from the Port and from the Point, a nearby Aboriginal settlement. The team's best player is an Aboriginal boy called Dumby. Gary is terrified of Dumby at first, but the boys bond over unlikely circumstances and become good mates. However, after a grand final win, and seeing the way that Dumby is treated (he's overlooked for a trophy that Gary believes he should have been awarded,) Gary starts to ask some hard questions about the different way that kids from the Point are treated--and then a tragic event leaves Gary questioning everything ... and facing the anger of his old man ...

This book came out when I was in my teens and for one reason or another I never read it. Nor did I ever see the film Australian Rules that was based on the book. And in all honesty, I'm sorry that I never read the book sooner or saw the film, as this one touched me quite deeply. The dialogue may be off-putting for some readers, but I found it perfect for the time and place.