Review: Lily and the Octopus by Steven Rowley 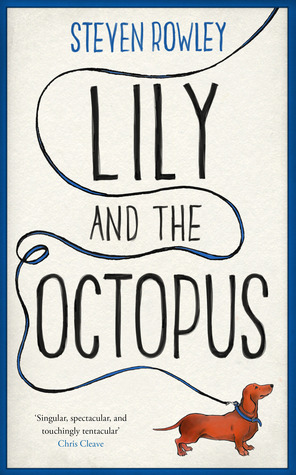 Thank you Lily and the Octopus for tugging at my heartstrings. You tugged, tugged hard and refused to let them go until the final page. In other words: This book made me cry, but I loved it very, very much.

Lily is an ageing dachshund and a faithful companion to Ted, a single gay man who is in his early 40s. Ted and Lily have a great relationship and it is obvious that Lily means the world to Ted. (And vice versa.) But then an unwelcome visitor appears--an octopus, who attaches itself to Lily's head. And Ted finds himself doing everything in his power to defeat the octopus while it slowly and nastily tries to take Lily away.

Anyone who has experienced the slow and excruciating loss of a loved one (whether that loved one has four legs or two,) will find Lily and the Octopus very easy to identify with. The use of metaphors is absolutely brilliant, as is the way that the author incorporates this clever literary technique with deceptively simple prose. The way that Ted deals with the situation at hand is believable and it is a perfect tribute that the love that humans feel for their pets, and also a study of grief. In the background there is some musings about Ted's past relationships, something that anyone who is past the age of thirty and is single, will be able to identify with--past mistakes and putting up with bad relationships well after their natural expiry date, couple with the conflicting desires of wanting to find a life partner but wanting to remain single.

Well written and easy to identify with. I was pleasantly surprised by this novel on several occasions.

Many thanks to Simon and Schuster Australia for sending me a copy of Lily and the Octopus.

Lily and the Octopus Steven Rowley