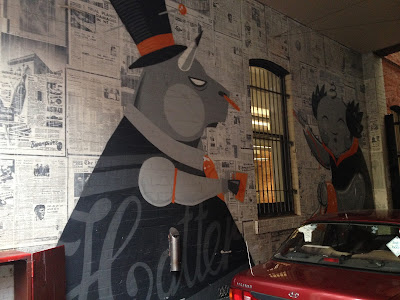 This is a mural that I snapped in a laneway on Leigh Street. As most Adelaide people know, Leigh Street (a pedestrian only city street, filled with bars and, during peak hour, office workers taking a short cut to the nearby Adelaide Railway station,) always has a lot tucked inside a relatively small space, and many, many strange and beautiful things can the found there if one takes the time to stop and have a look around. Although less than a hop, skip and a jump away from the delightfully colourful (and dare I say, far more iconic,) Hindley Street, Leigh Street is always has a bit of an upmarket, hipster vibe. (Even if the northern side does look straight at a run down hotel that is covered in ceramic tiles.)